Growing organic: bridging the gap between farmers and society 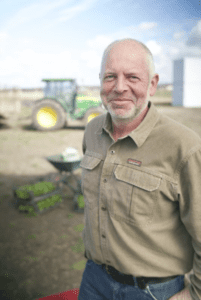 I like to say that I was first trained by earthworms. And now, I like to think that I am taking that training to other farmers, and to society.

When I started vermicomposting on my family’s conventional grain farm in Austria about 25 years ago, my motivation was to have a lucrative business opportunity — I knew that organic fertilizer could earn quite a nice premium in our region of the country. I had, at that time, very little scientific know-how regarding earthworms’ potential in environmental protection; my education, which had been in a professional oenology school (the study of wines), did not provide me with soil and climate knowledge. And we certainly had a learning curve: after approaching the university for help, it took us probably five to seven years to acquire a knowledge base that was substantial enough to succeed with vermicomposting. But we did manage to do so, and, as I continued to learn more about the science behind earthworms, I was more and more inspired by the way that they do things.

Earthworms are a lot more clever than us humans: they, seemingly effortlessly, have a symbiotic relationship with so many aspects of their ecosystem, like water infiltration and soil health. When I made this realization, I decided to transition our farm to organic production (despite the lack of trust in organic agriculture in my community).

On our 90 hectares farm, which follows an alfalfa to winter wheat rotation, and also incorporates hemp, soybeans, and rye, we decided to try to minimize trade-offs with the environment, just as earthworms do. Our vision has been to show what is possible if we work to overcome the known constraints in creating diverse production systems. Now we are trying to demonstrate that food systems can leave the earth better than it was before, by adapting well-known regenerative and nature-positive systems to our region and climate. Instead of optimizing our operation for only economic gains or yield, we also focus on other aspects, such as adapting to or mitigating climate change; closing the gender gap in agriculture; stopping biodiversity loss; improving soil health; and, of course, still making sure that we have a profit.

My farm helped me to stay afloat economically while I also pursued the new entrepreneurial endeavor of vermicomposting, and we were able to start a side business called VERMIGRAND. After VERMIGRAND was relatively well established, I was able to divert more of my attention back to our organic farm production and I became very interested in improving our (already reduced) tillage system.

This interest was fueled in part by social media, actually. I had become quite active on Twitter, where I found it easy to connect with experts in soil health. Their community opened my eyes to new technologies in no-till organic systems, and it was then that I became quite involved with the Rodale Institute in the US, who decided to support my work here in Austria. Jeff Moyer at Rodale Institute helped me to plan demonstration plots to experiment with the organic roller-crimper no-till practice. This was a huge success, and, with these connections within the scientific communities in both Europe and the US, we organized an organic no-till conference here in Austria. All of these collaborations with the scientific community made me realize that I don’t need to be an expert in everything, when there are so many existing experts in science that I can work with — and this collaboration is made more meaningful when science is also informed by a healthy perspective of on-farm realism.

In Europe, some farmers seem to be disincentivized toward organic farming because of factors such as: limited knowledge, having little trust that it will be economically viable, and governance challenges. Here, we still need financial support and incentivization, especially during the phase in which farmers must absorb a lot of the financial burden that comes with transitioning to organic.

An existing governance tool that has aimed to fill that income void has been the Common Agricultural Policy (CAP). The CAP runs parallel to the Multi-annual Financial Framework (MFF), which is the European budget that is renewed every seven years. Farmers have business strategies which span decades, if not generations. And included in those plans are often government subsidies. These timelines are mismatched: the challenge is that the CAP and other agriculture regulations change every seven years, which makes long-term planning and significant changes, such as converting to organic, often very difficult to achieve in the very short windows of time within those seven-year cycles.

I also hear from my international network that their markets don’t make it easy to convert to organic, or other labelling schemes. In Austria, about 26% of the land is under organic production, which means that it is very easy to find a distributor to buy our organic grains — some of my US counterparts, however, have encountered issues with organic buyers. Even if they have an organic product, it isn’t always easy to find a nearby organic distributor that will buy their goods; in fact, some would need to travel 300 miles just to ensure they get the organic premium, which doesn’t encourage others to make the transition.

Overall, I think that most of the challenges related to the transition from conventional to organic are related to a lack of knowledge and trust, as well as to poor communication between farmers, science, and society. I tried to create a bridge between farmers and science on my farm, to also demonstrate to my neighbors that these transitions are possible — but a gap still remained on my farm in terms of communication with society. And to once again provide an example to other farms, and to connect with society, our newest endeavor is the creation of a market garden.

This has turned out to be a very complex adventure, because I am a trained grain farmer and yet I am now growing around 50 other crops and directly selling these to my local community. But, as much as it has been a challenge, this process has been equally rewarding: the support and interest from our village has provided us with a unique opportunity to also share important knowledge about farming and food systems with our customer base (and beyond), as well as to show our region the importance of revitalizing the rural areas through food production. I hope that this will inspire other farmers and entrepreneurs to incorporate market gardening into their operations, as it really helps to increase local food security and create resilient systems.

Our hope is that our operation, with its vermicomposting operation, organic farm, and market garden, can help to bring together science, farmers, and society, so that we can inspire others to follow our model around the world.

This blog was published in partnership with Wageningen University & Research, the CGIAR Research Program on Climate Change, Agriculture and Food Security (CCAFS) and the World Business Council for Sustainable Development.