21 October 2021
By Diana Lenzi, President of the European Council for Young Farmers (CEJA) 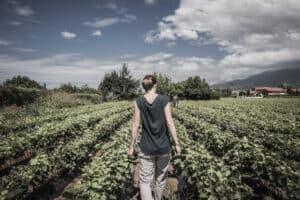 It was 2008. I was a chef in Rome. I had studied political science but, having decided politics was not for me, I decided to make a career following my passion of cooking for people.

Then I got a call from my parents, and I made a big decision. I moved back to run my family’s farm in Tuscany.

On our property, we farm 16 hectares of vineyards in the Chianti Classico DOCG[1]. My father had inherited the property from his grandfather in the 1960’s. For years, the farm produced and sold grape juice in bulk. My dad was becoming an acclaimed neurologist, so outsourcing the work was the easy and traditional thing to do. But it was not satisfying. My parents wanted to invest in quality, not quantity. So, we slowly began replanting the vineyards on our land with twice as many plants per hectare, but only harvesting about a third of the yield on each plant. They helped set up the wonderful winery I was being asked to run. Now, as a young woman with no training in oenology, agronomy, or business–three skills you probably want if you are going to be an agricultural entrepreneur–I needed to figure out how to bring a positive impact on the farm, in what was historically a difficult moment for the wine world.

I changed a lot of things but never the spirit. I continued replanting our fields with support from the EU. I started repropagating our own selection of clones thanks to an agronomist and worked to recreate unique vines on our property from old varieties. I expanded our exports to the United States, Orient, and Europe. I also kept some things the same, like using traditional chestnut poles instead of aluminum poles in our newly replanted fields.

I wanted to preserve traditions and introduce new ones.

The family business was thriving, but I was lonely. Our farmland is beautiful, but in the winter, it gets dark early, and there aren’t many people around. So, I started actively meeting with other young farmers in my area. Over wine and meals, we shared our stories with one another. We organized a group of artisanal Tuscan producers to go in together on an EU program that promotes the export of quality goods. We held classes on labeling and marketing.

My engagement went as far as that, in June 2021, I became the president of the European Council for Young Farmers (CEJA) in Brussels. And as I got more involved with groups working on EU and Italian agricultural policy, I had two realisations.

The first is that we can’t effectively improve support for agriculture without the guidance of farmers themselves. To be frank, the view from Brussels is quite different than the view from our fields. For example, aluminum poles are cheaper and more durable than chestnut poles. So why do I use chestnut poles? The answer is borne of experience. Chestnut is a beautiful wood that has been used here for generations. Tourists are drawn to Tuscany for its beauty. For European farming to prosper, we must invest in the preservation of its cultural heritage — not just in its economic viability. In a policy setting, striking this balance between form and function of agriculture is complex. It is case specific. It varies by region, by geographic scale, and by season.

We need the rich, variegated experiences of farmers to craft policy that works.

The second realisation is that agricultural policy must create the enabling conditions for the generational renewal of farms. Broadly speaking, we don’t make it easy for young farmers to access the capital they need to access land and equipment. This only makes things easier for those who already have capital. As a result, we’re running the risk of monopoly in agriculture. And for young farmers who do happen to have access to land, we need credit and loan schemes that are more accessible and impactful. For instance, policies should cover a proportion of farmland improvements rather than just a small lump sum, so that the level of support is reflective of the level of need.

Europe’s farming population is aging; nearly 90% of farmers are over the age of 40. We need the voice of young farmers in every policy discussion we have. And we need those policies to be finely tuned to the evolving needs of this next generation of producers. Because the choice between aluminum and chestnut depends on the needs of tomorrow.

This blog was published in partnership with Wageningen University & Research, the CGIAR Research Program on Climate Change, Agriculture and Food Security (CCAFS) and the World Business Council for Sustainable Development.

[1] Controlled and Guaranteed Designation of Origin. A stringent quality category for Italian wine.